I recently encountered an OOM error in a simple groupByKey application. After profiling the application, I found the OOM error is related to the shuffle spill and records (de)serialization. After analyzing the OOM heap dump, I found the root causes are (1) memory leak in ExternalAppendOnlyMap, (2) large static serializer batch size (spark.shuffle.spill.batchSize =10000) defined in ExternalAppendOnlyMap, and (3) memory leak in the deserializer. Since almost all the Spark applications rely on ExternalAppendOnlyMap to perform shuffle and reduce, this is a critical bug/defect. In the following sections, I will detail the testing application, data, environment, failure symptoms, diagnosing procedure, identified root causes, and potential solutions.

This is a simple GroupBy application as follows.

The sourceIP (an IP address like 127.100.101.102) is a column of the UserVisits table. This application has the same logic as the aggregation query in Berkeley SQL benchmark (https://amplab.cs.berkeley.edu/benchmark/) as follows.

The application code is available at [1].

This application launched 32 executors. Each executor has 1 core and 7GB memory. The detailed application configuration is

This application has a map stage and a reduce stage. An OOM error occurs in a reduce task (Task-17) as follows.

Task-17 generated an OOM error. It shuffled ~1GB data and spilled 3.6GB data onto the disk.

Task-17 log below shows that this task is reading the next record by invoking ExternalAppendOnlyMap.hasNext(). From the OOM stack traces and the above shuffle metrics, we cannot identify the OOM root causes.

A question is that why Task-17 still suffered OOM errors even after spilling large in-memory data onto the disk.

Since each executor has 1 core and 7GB, it runs only one task at a time and the task memory usage is going to exceed 7GB. 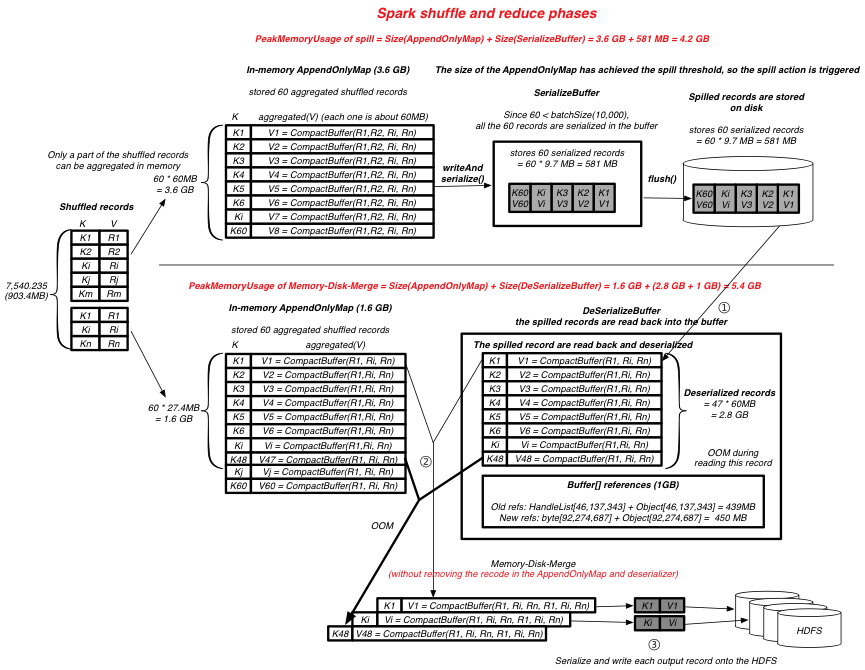 The concrete phases with metrics are as follows. 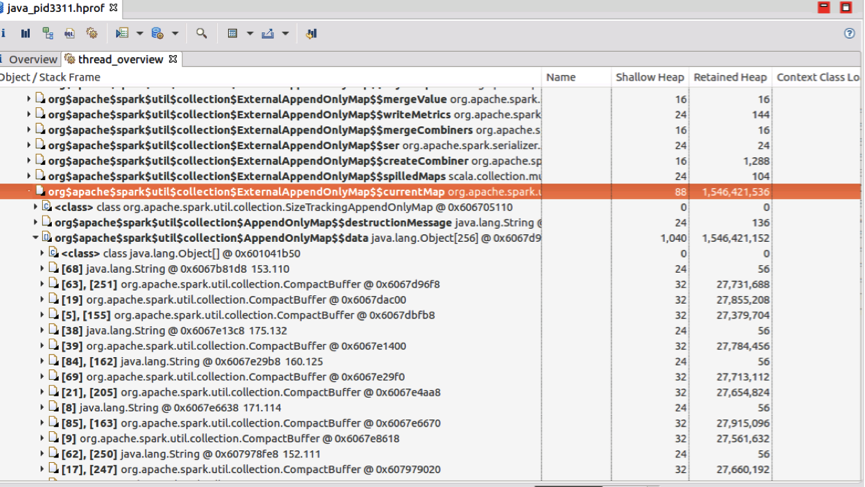 Figure 2 AppendOnlyMap in the heap dump

[Memory-Disk-Merge] The next step is to merge the on-disk spilled records (60 records, unserilaizedSize=3.6GB, serializedSize=581MB) with the in-memory records in AppendOnlyMap (60 records/1.6 GB). As shown in Figure 1, for each spilled record Rec_i, Spark uses Java/Kryo deserializer to deserialize Rec_i into the DeSerializeBuffer, merges Rec_i with the in-memory record with the same key, generates new record, and finally outputs the new record onto HDFS. This procedure is assumed to be pipelined with low memory consumption (without any accumulation of records and intermediate results). However, the task generated an OOM error in this procedure (while merging the 48-th spilled record with the 48-th record in AppendOnlyMap). The following log in PairRDDFunctions. saveAsNewAPIHadoopDataset() shows this fact.

Then, I dump the OOM heap. The heap dump below shows that the memory consumption mainly consists of three parts:
(1) AppendOnlyMap (1.6GB, 60 records, avgRecordSize = 27.4MB) (Figure 2)
(2) Spilled records buffed in DeSerializeBuffer (about 3GB)

The above figures shows that 48 spilled records are buffered in DeSerializeBuffer (HandleTable) with about 2.6GB String and 300MB other objects. 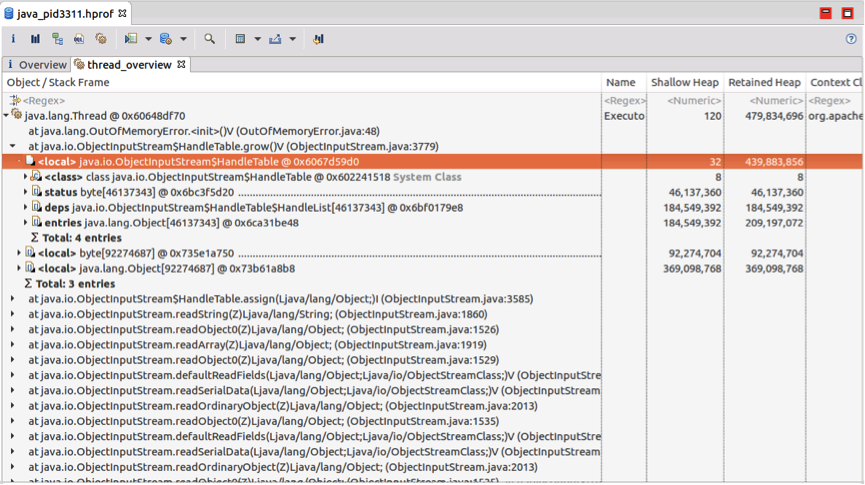 The above analysis reveals the root cause: the spilled records and in-memory records are still kept in memory even they have been merged. The root causes can be further summarized as follows.
(1) Memory leak in ExternalyAppendOnlyMap: The merged in-memory records in AppendOnlyMap are not cleared after Memory-Disk-Merge.
(2) Large serializer batch size:
The serializerBatchSize ("spark.shuffle.spill.batchSize", 10000) is too arbitrary and too large for the application that have small aggregated record number but large record size. For these applications, all the spilled records (3.6GB in this case) will be serialized in a buffer and written as a whole file segment at a time. In other words, the 3.6GB records will be read back to memory at a time. Other applications that have large record number with small record size may be OK, because the spilled records may be serialized and written to many files. In other words, the 3.6GB records will be read back to memory in several times with low memory consumption.
(3) Memory leak in deserializer: The spilled records are not cleared from the DeSerializeBuffer after Memory-Disk-Merge, which leads to both large buffer and large object references.

(2) Adaptive serializer batch size instead of static spill threshold and static serializerBatchSize: Since we can dynamically obtain (estimate) the record number and bytes in AppendOnlyMap, we can estimate the size of serialize/deserialize buffer size when the spill threshold is achieved. Based on this information, we can accordingly lower the batch size to write the serialized records into multiple file segments.
(3) Handle memory leak in the deserializer: Try to remove the merged spilled records in the deserializer or design a new deserializer.

The whole task OOM log can is available at [3].