I'll start with the symptoms and eventually come to the cause.

We are using HDP 3.1 and Noticed that every couple of days the Hive Metastore starts doing GC, sometimes with 30 minute long pauses. Although nothing is collected and the Heap remains fully used.

Next, we looked at the Heap Dump and found that 99% of the memory is taken up by one Executor Service for its task queue. 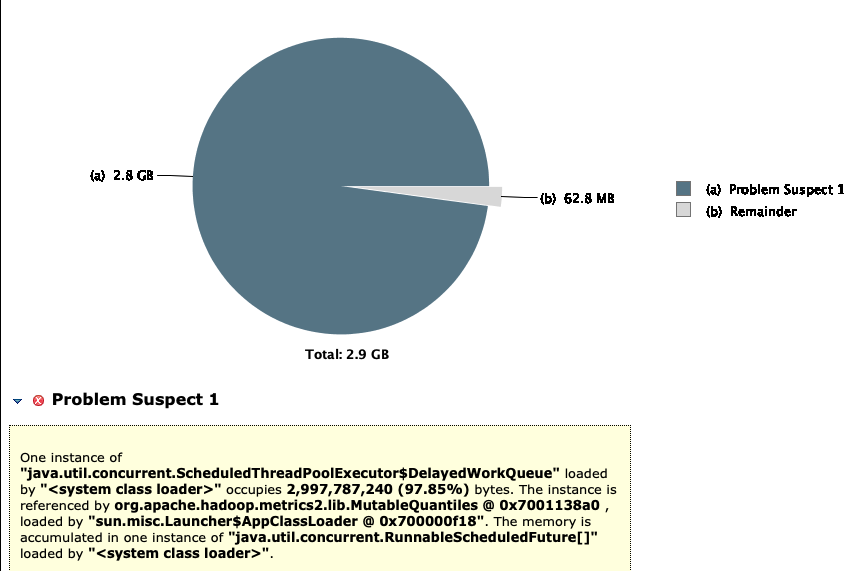 The second thing to notice is this block of code in the Constructor of MutableQuantiles:

So As soon as a MutableQuantiles Instance is created, one task is scheduled at Fix Rate. Instead of that, it could schedule them at Fixed Delay (Refer ).

Now coming to why it's related to S3.

S3AFileSystem Creates an instance of S3AInstrumentation, which creates two quantiles (related to S3Guard) with 1s(hardcoded) interval and leaves them hanging. By hanging I mean perpetually scheduled. As and when new Instances of S3AFileSystem are created, two new quantiles are created, which in turn create two scheduled tasks and never cancel them. This way number of scheduled tasks keeps on growing without ever getting cleaned up, leading to GC/OOM/Crash.

MutableQuantiles has a numInfo field which tells things like the name of the metric. From the Heapdump, I found one numInfo and traced all objects referencing that.

There seem to be 300K objects of for the same metric (S3Guard_metadatastore_throttle_rate).

As expected, there are other 300K objects for the other MutableQuantiles created by S3AInstrumentation class.

Although the number of instances of S3AInstrumentation class is only 4.

Clearly, there is a leak. One S3AInstrumentation instance is creating two scheduled tasks to be run every second. These tasks are left scheduled and not cancelled when S3AInstrumentation.close() is called. Hence, they are never cleaned up. GC is also not able to collect them since they are referred by the scheduler.

Who creates S3AInstrumentation instances? S3AFileSystem.initialize(), which is called in FileSystem.get(URI, Configuration). Since hive metastore is a service that deals with a lot of Path Objects and hence needs to do a lot of calls to FileSystem.get, it's the one to first shows these symptoms.

We're seeing similar symptoms in AM for long-running jobs (for both Tez AM and MR AM).